mgpost is a tool for post-processing and visualization of 3D DEM simulations. The source code can be found within yade repository, in the folder extra. A quick user guide is also provided.

As I sortly said, mgpost is a small soft for viewing 2D or 3D discrete element simulations. These simulations can be performed with the computer code of your choice (I hope it is yade!). The 'comunication' between the simulation code and mgpost is performed through MGP files. It is actually a XML format with specific tags (described in the user guide).

mgpost uses the standard openGL API for 2D and 3D vectorial graphics. It can currently be compiled on unix-like operating system such as kubuntu or Mac OS X, and have already be builded on windows in the past.

mgpost uses a very basic C style programming (unlike Yade that is build with a very nice C++ design), but meanwhile a great software for 3D visualization, it just work fine !

mgpost is not yet compiled with scons but a simple Makefile. From yade directory type:

And for Mac OS X type:

If you want to install mgpost in /usr/local/bin (can be modified in Makefile) type:

A basic (StandAlone)Engine is provided for this purpose: MGPRecorder. It works only for spheres for the moment.

Here are some screenshots generated with mgpost. 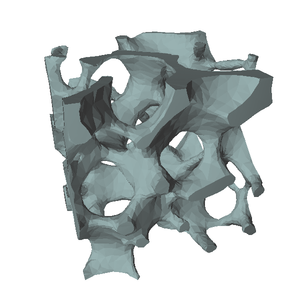 A meshed tomography for SpherePadder 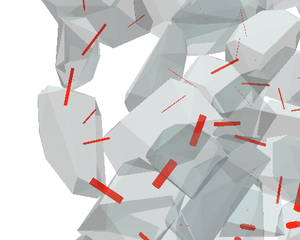 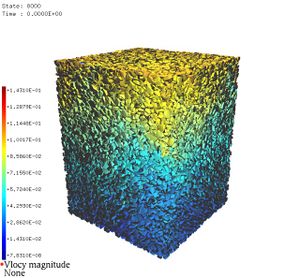 Packing of 40 000 polyhedra (the walls are not shown). The colors correspond to velocity magnitude of the particles
Retrieved from "https://yade-dem.org/w/index.php?title=Using_mgpost&oldid=556"